If you like this project, why not check out my open source Bluetooth Low Energy Color Sensor at www.nixsensor.com!

If you want to know how a coil gun works, or you don’t even know what a coil gun is, check out the coil gun v1.0 page here.

I was quite impressed with my first coil gun’s performance. It could pop a screw across a room, or shoot a paperclip at some kid across the classroom quite nicely, but I always dreamt of having more power. Being a university student and such, I never really had any money lying around to be able to build a more powerful version so I kinda just gave up and forgot about it for awhile. That is, until my girlfriend randomly brought up that the store she works at (Party Packagers) was trying to get rid of a whole bunch of expired disposable cameras. It was a freakin’ gift from GOD. At 1 buck each minus the 20% employee discount I had to get 13… Why 13 you ask? I have no idea, but it was probably the amount of money I had in my wallet at the time. The cameras sat in a bag in my room until reading week, when I set out to build my most powerful coil gun yet. 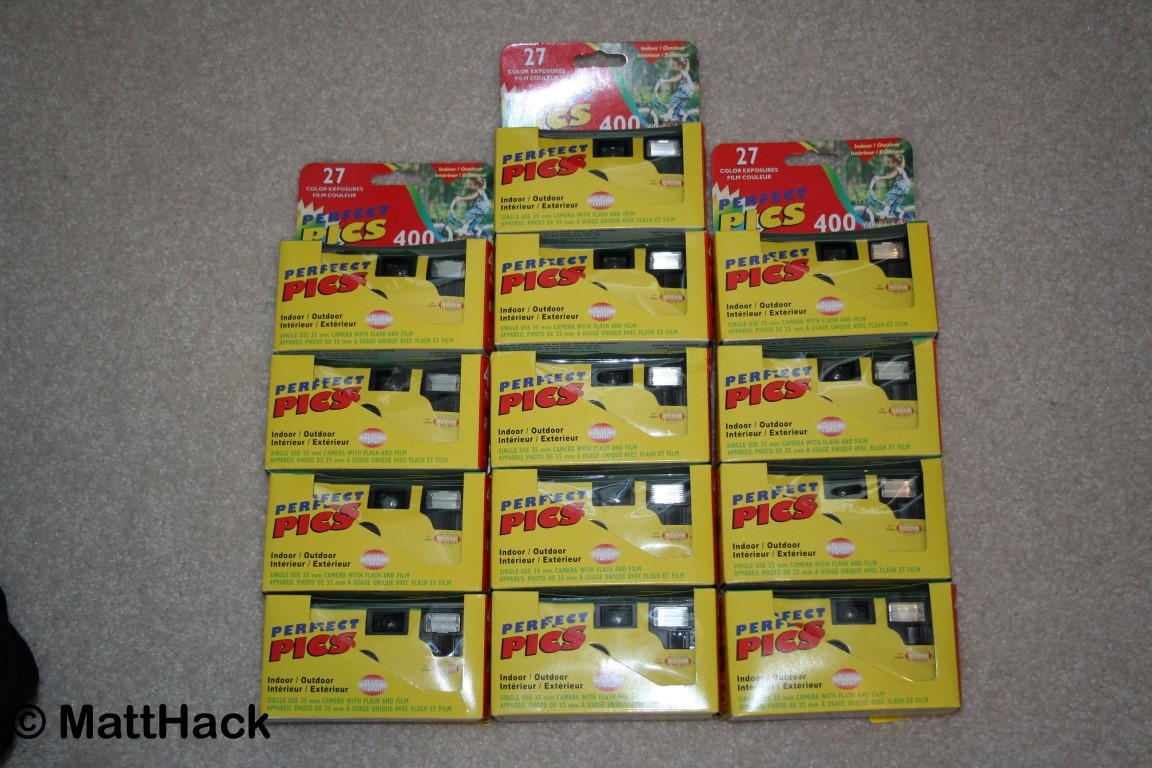 13 disposable cameras (I only ended up using 10 in the coil gun, the other 3 are for another project idea ) 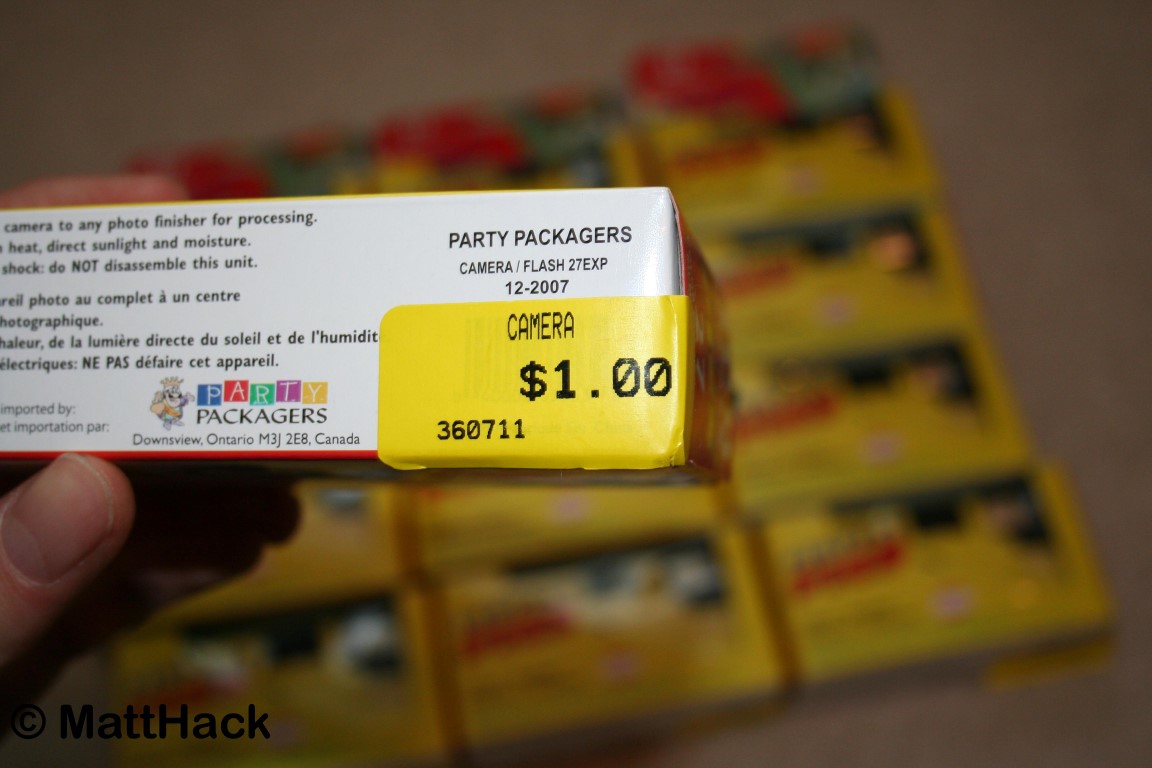 At a dollar you can’t possibly go wrong. 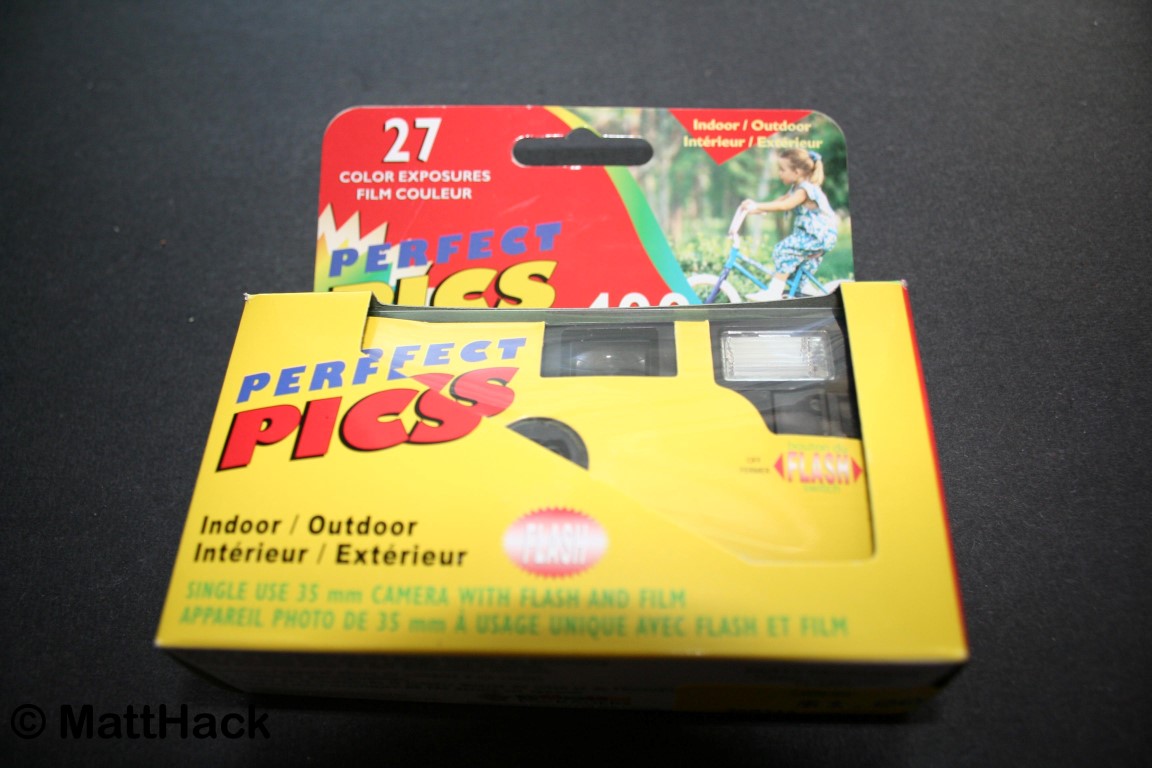 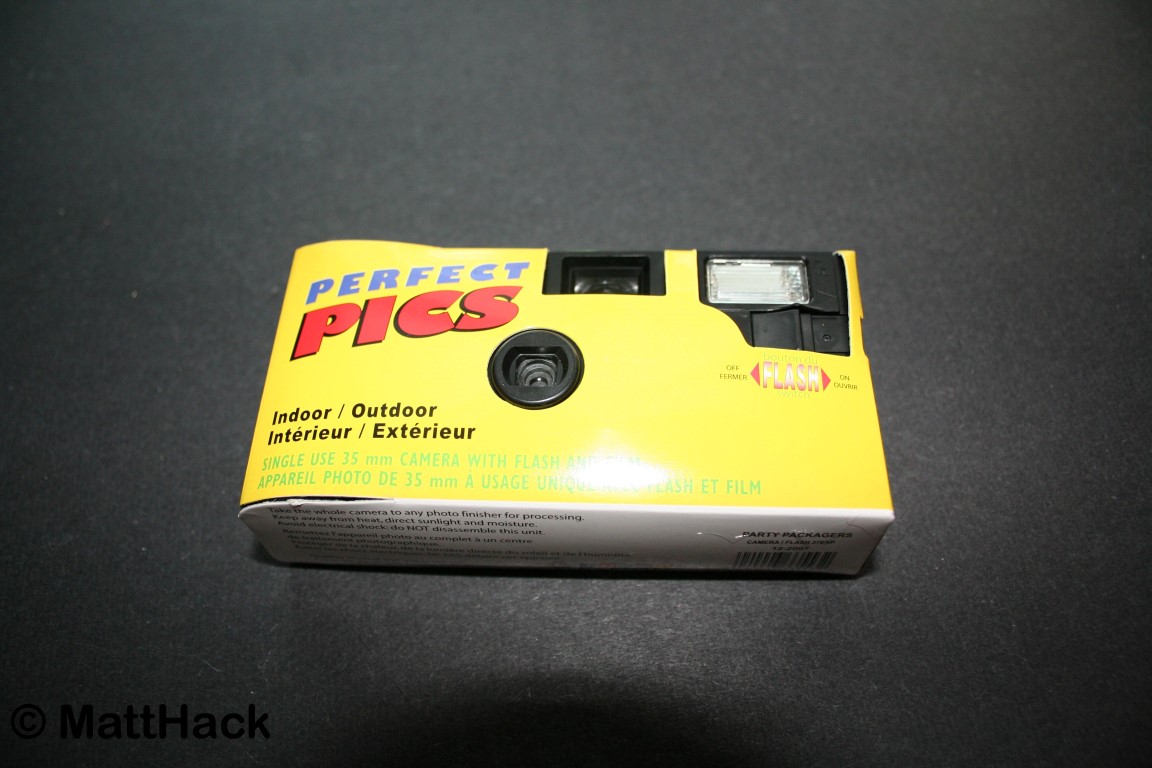 Ok, so now you have to get to the guts of the camera by taking it apart. 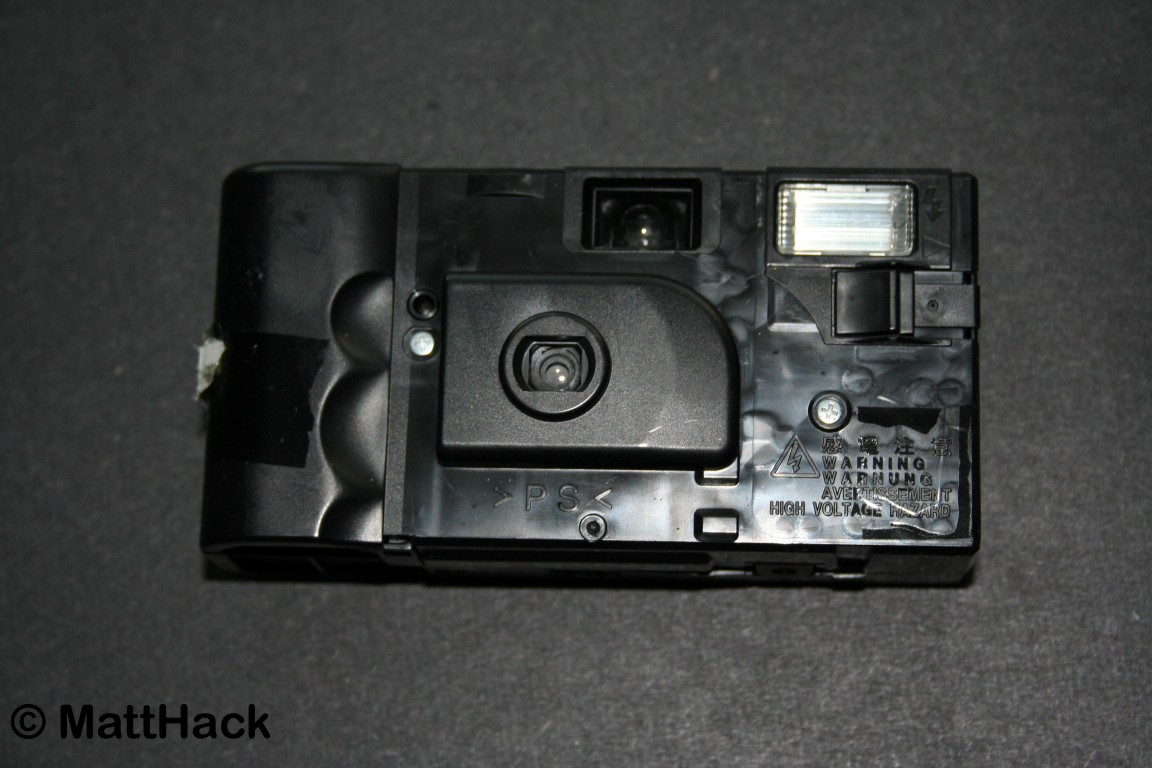 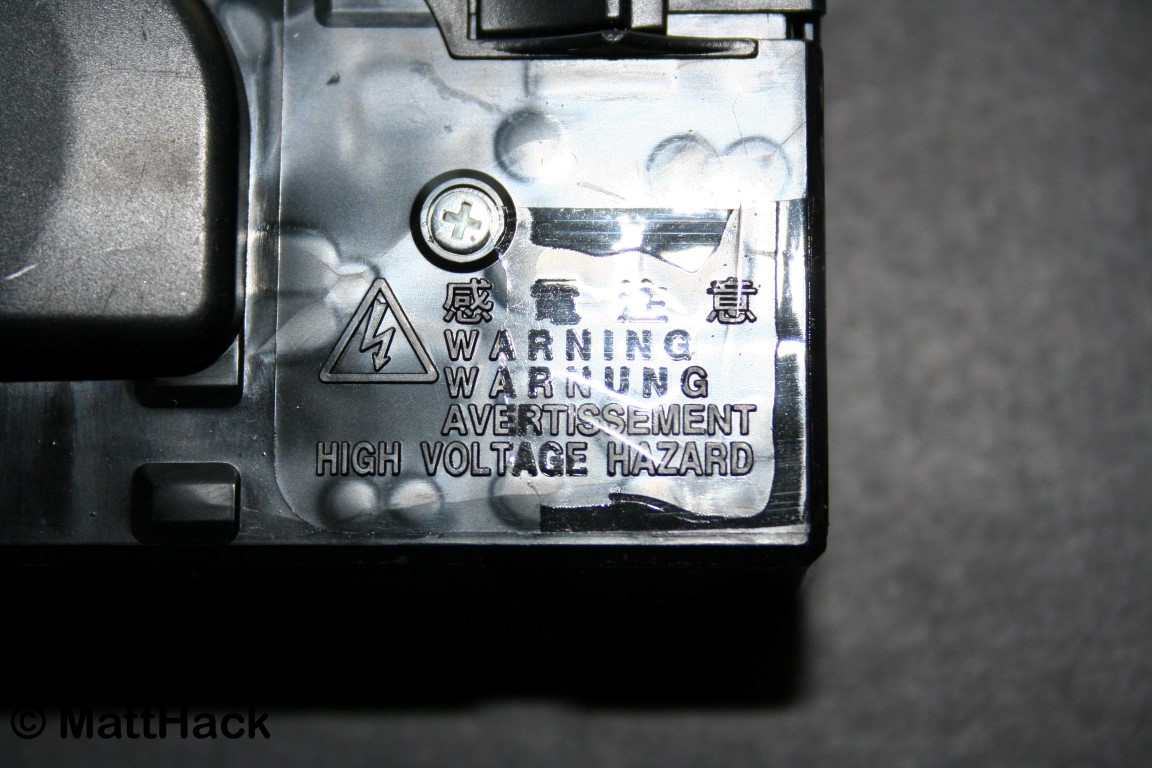 Be sure to read all warning labels carefully… Then laugh at them.

To open the back of the case you have to push in all these tabs around the camera at once, and then pull. (I used a small flathead screwdriver to pry them open) 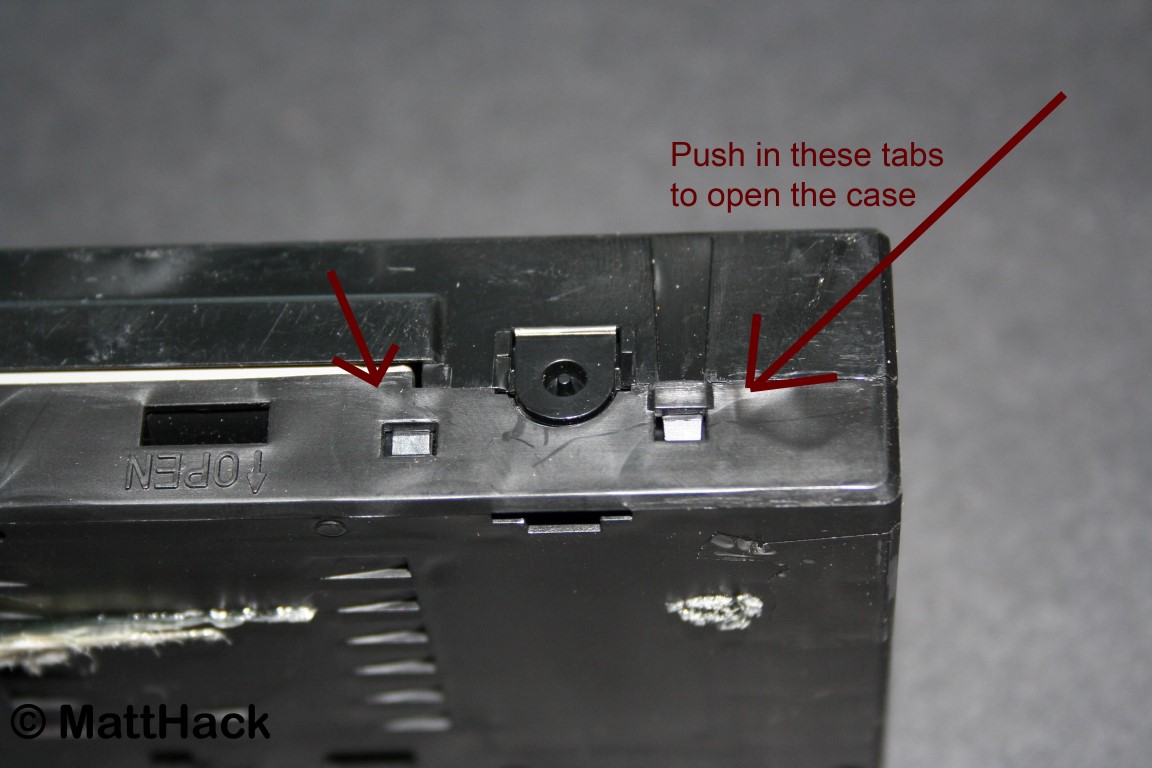 Once the back of the camera is removed you can see the film. Remove it. 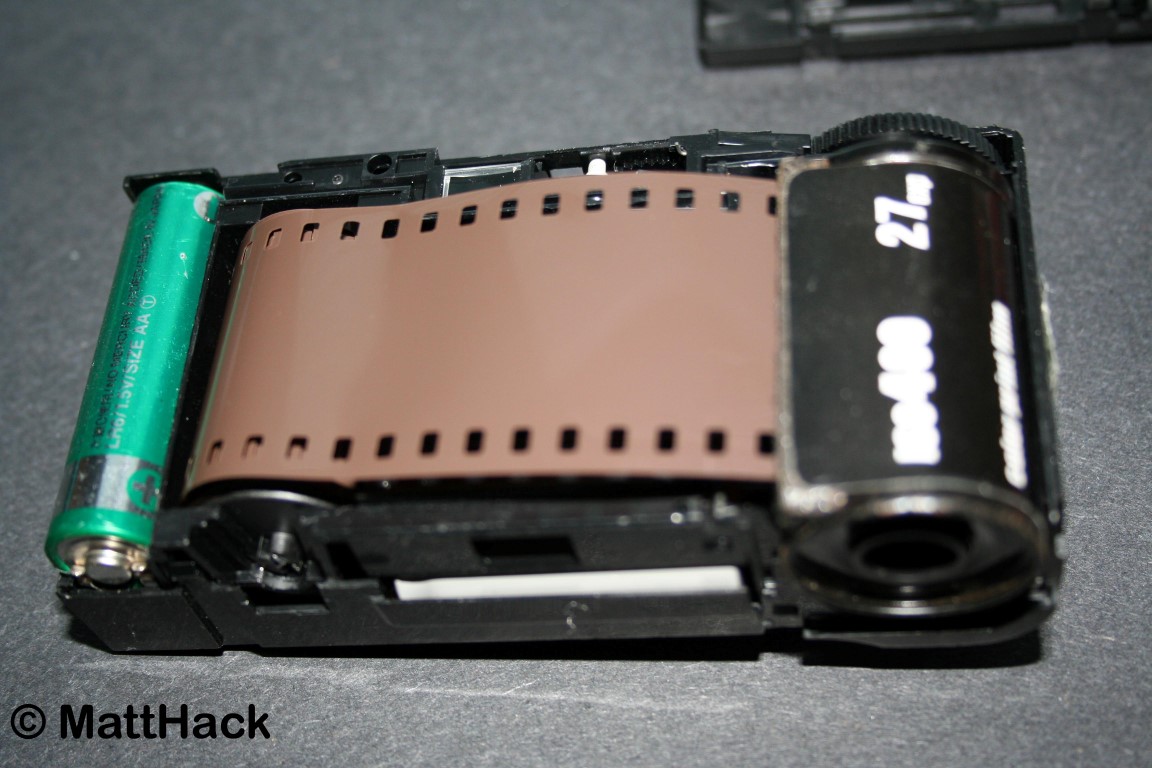 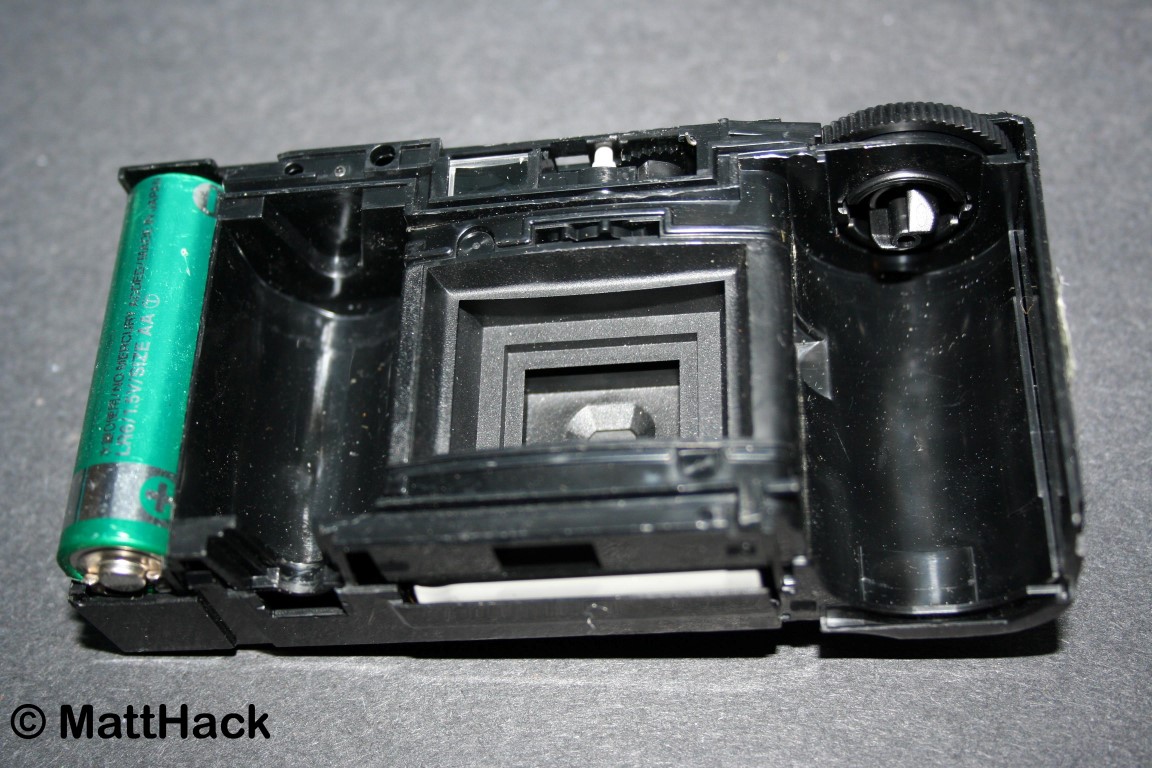 With the battery and film removed you can now unscrew the front of the camera using a small Phillips screwdriver. 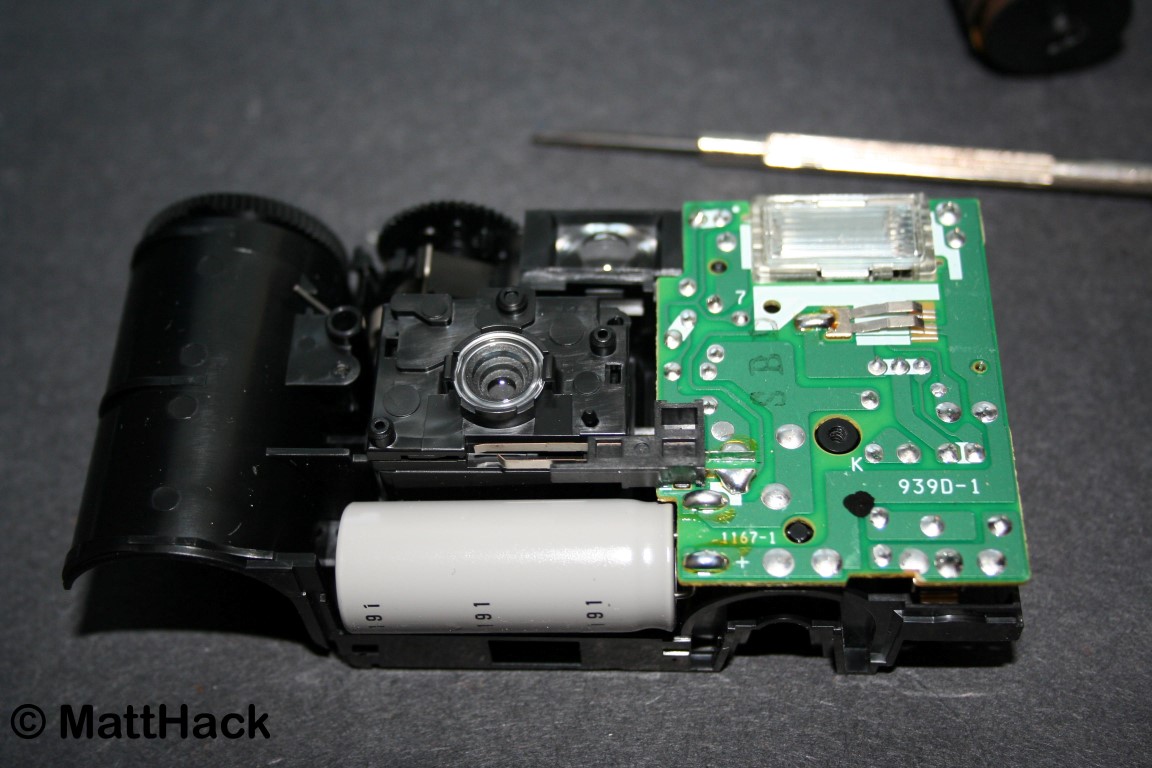 You can now remove the circuit board from the camera. (front view of circuit^^) 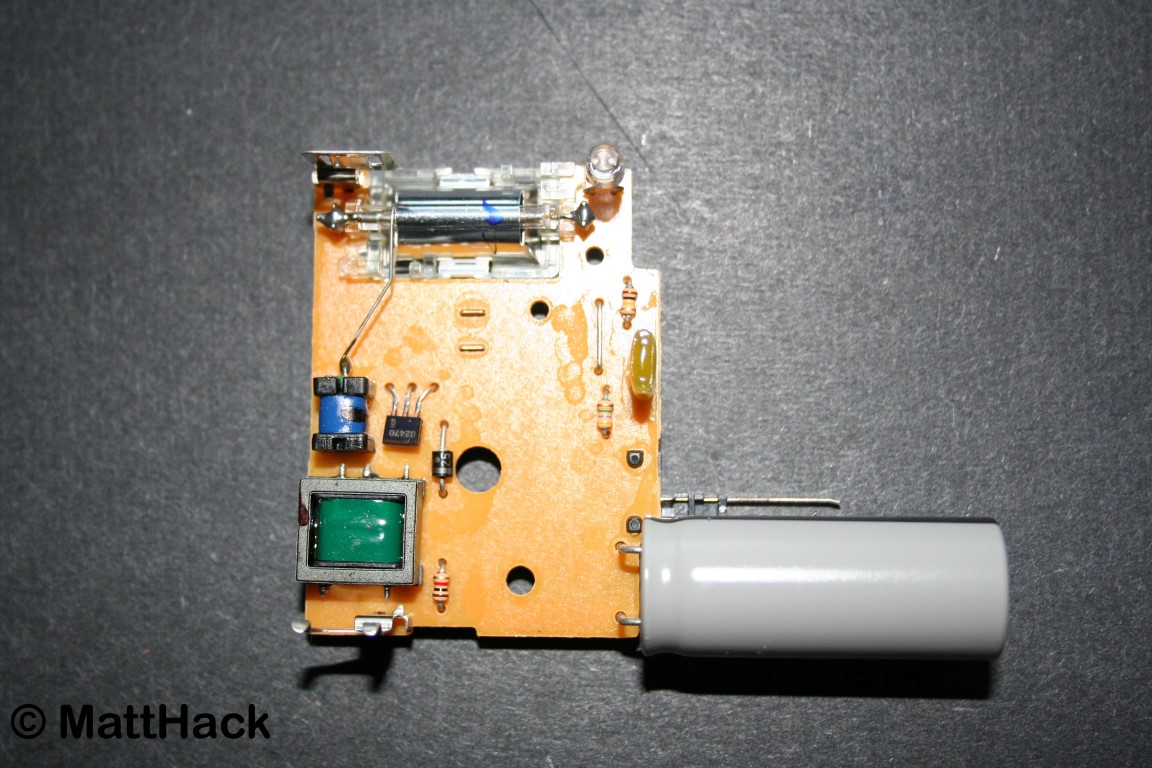 Back view of circuit. 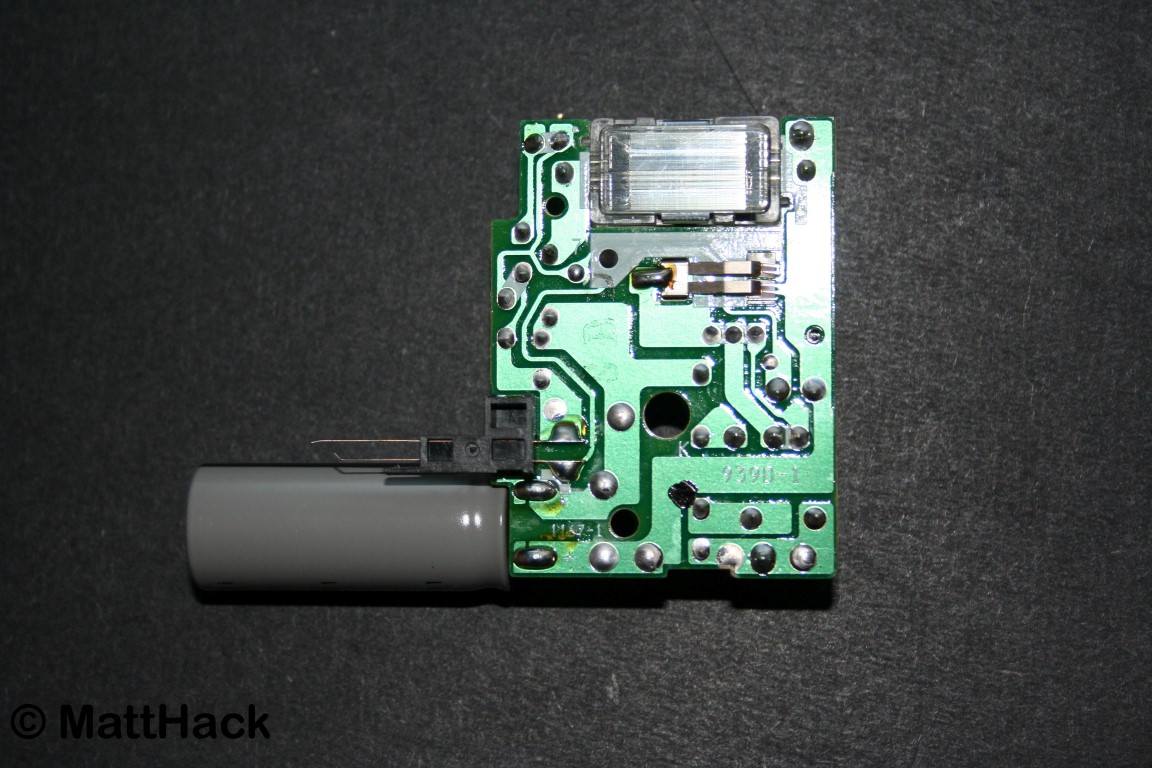 Now we have to “harvest” the capacitor. This is done be desoldering the two points indicated. 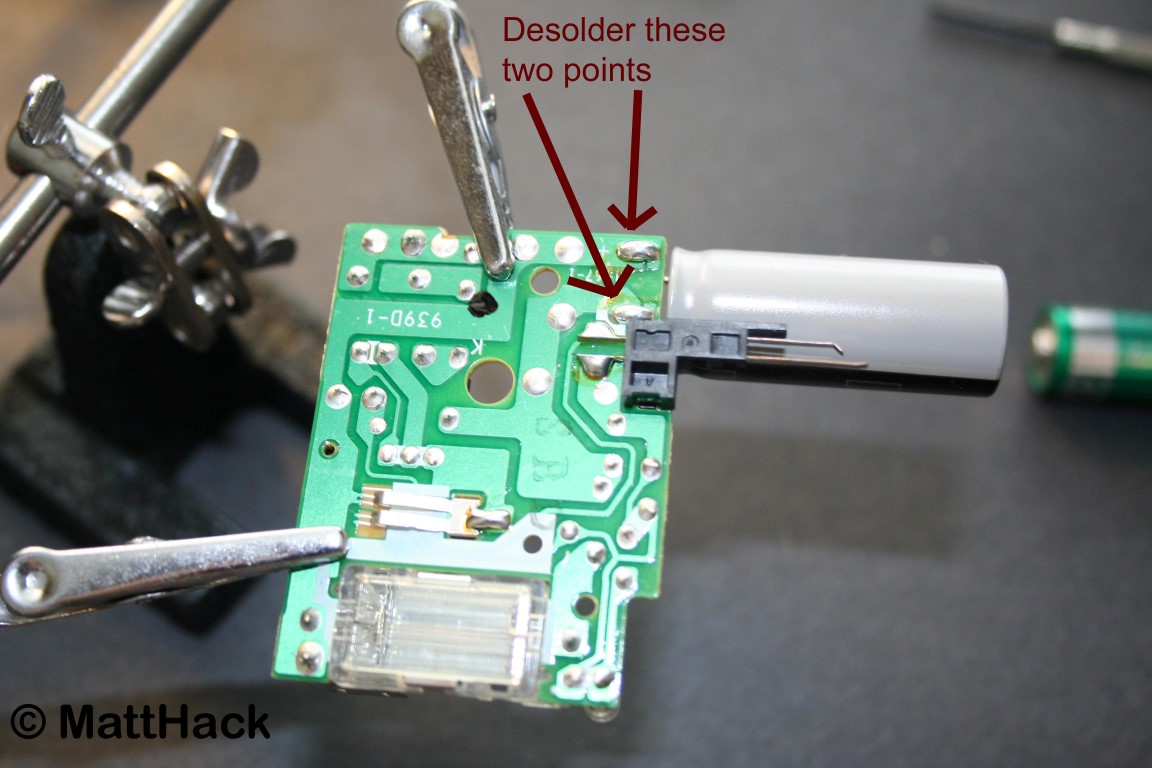 Straighten out the capacitor leads using needle nosed pliers and you’re the disassembly . 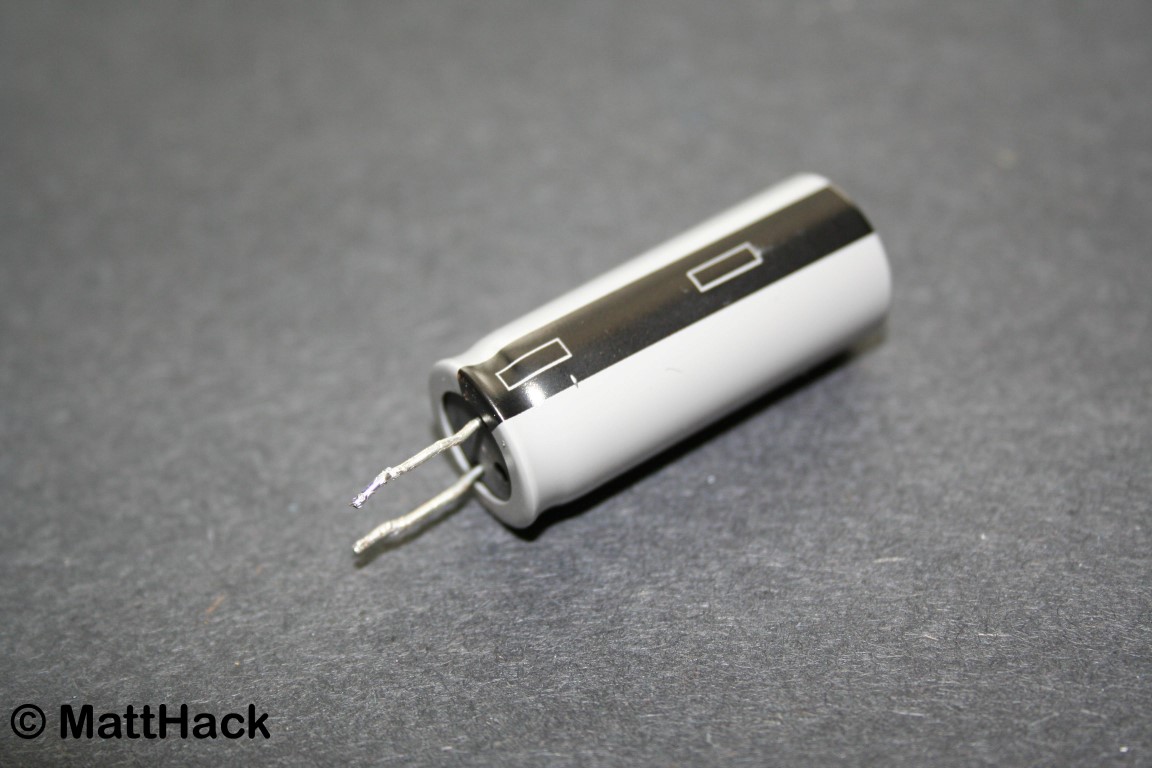 Repeat this process for all the cameras and you’ll end up with all this. Its a pretty damn good components source for a dollar. 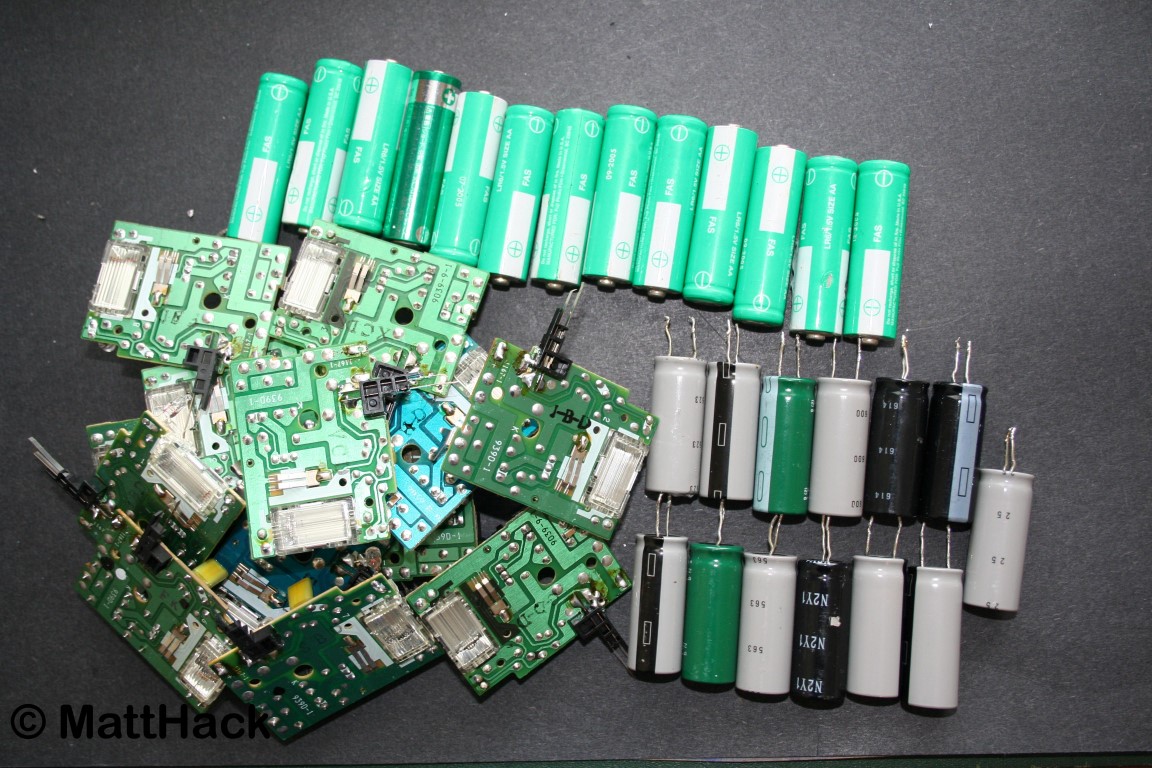 Oh ya… You’ll also end up with this big ass pile of garbage. 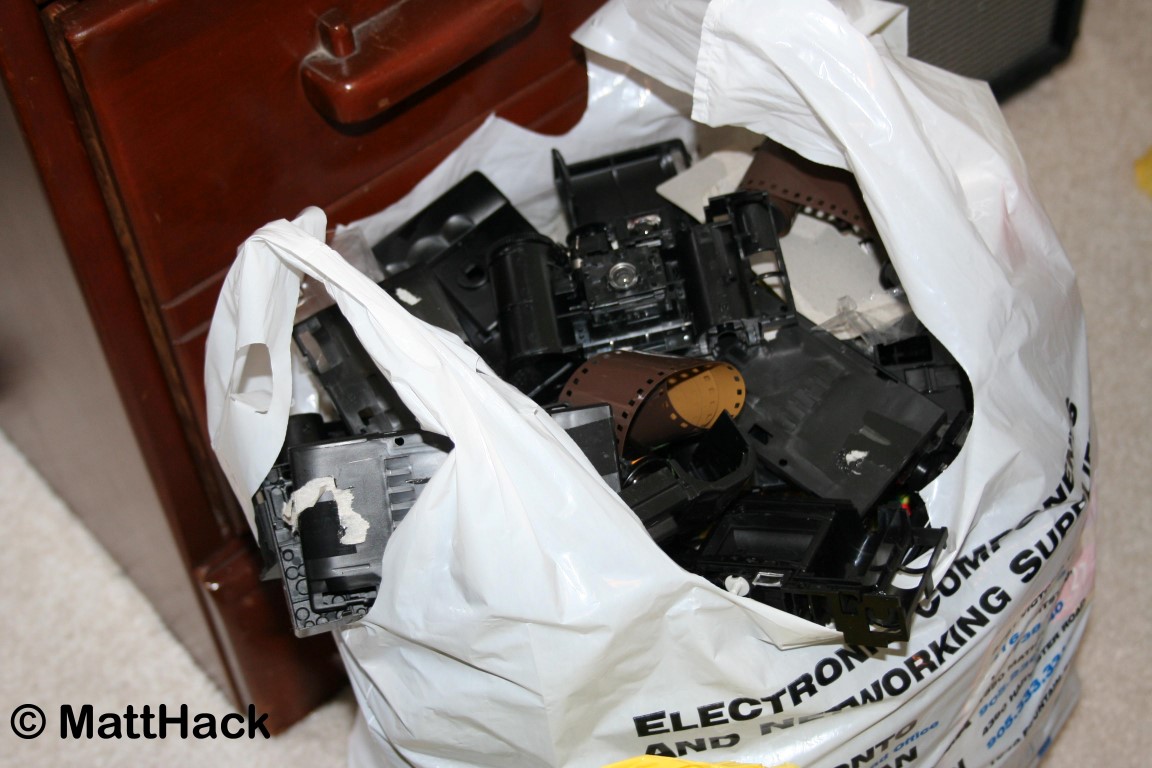 Now that we have all the parts we need we need to build the Coil Gun. 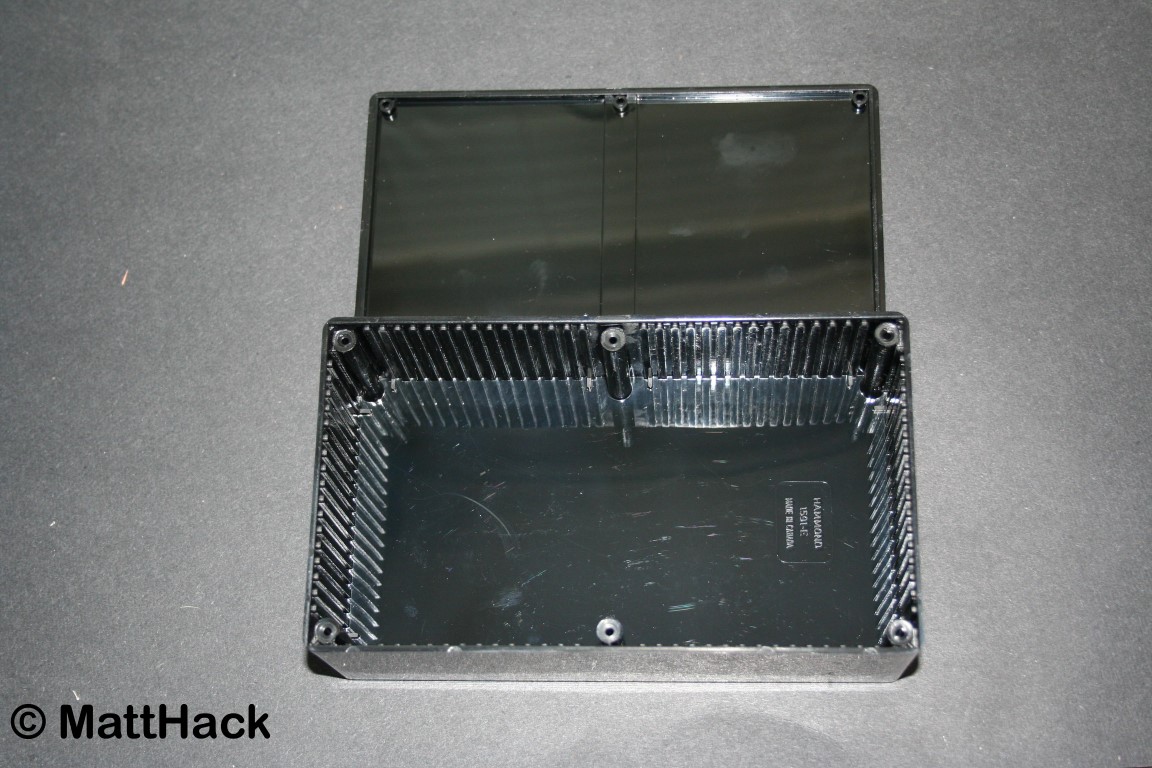 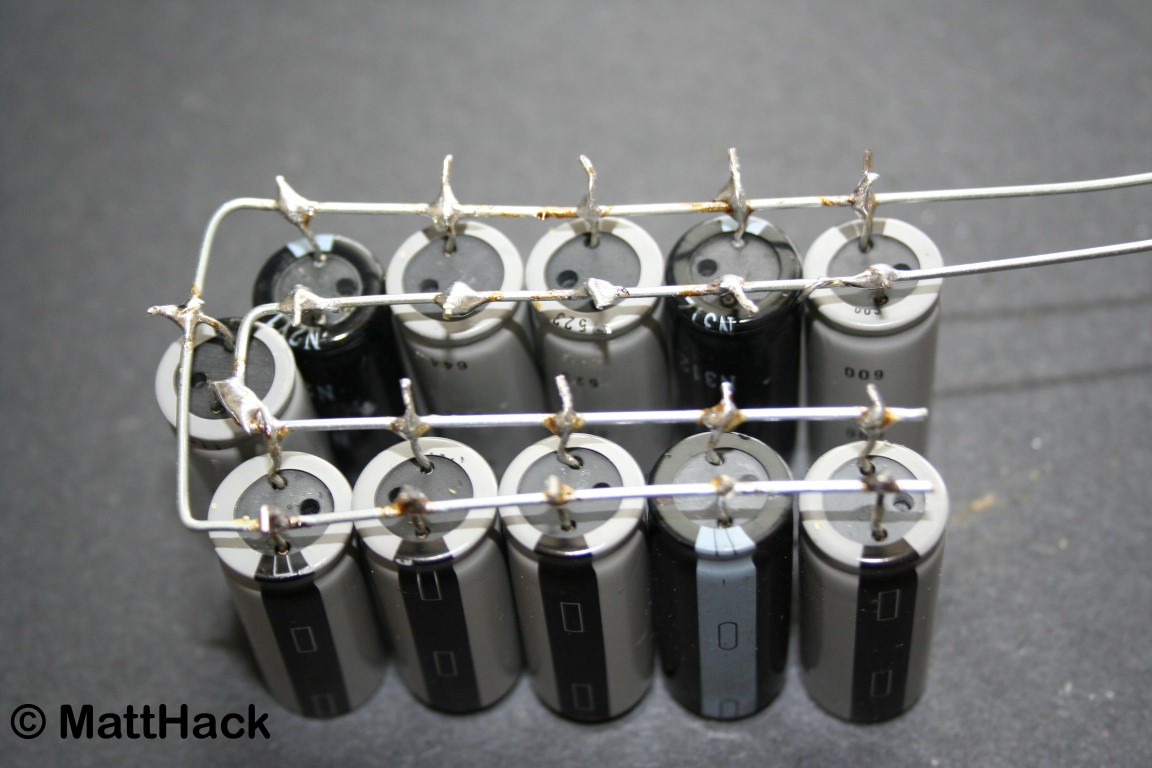 Ok so now you have to build the capacitor bank. The capacitors must be wired in parallel (+ to + and – to -). I used a stiff, heavy gauge wire that I bent into shape using needle nosed pliers. This allows the capacitor bank to keep its shape and it is a lot easier to solder together than with individual wires. 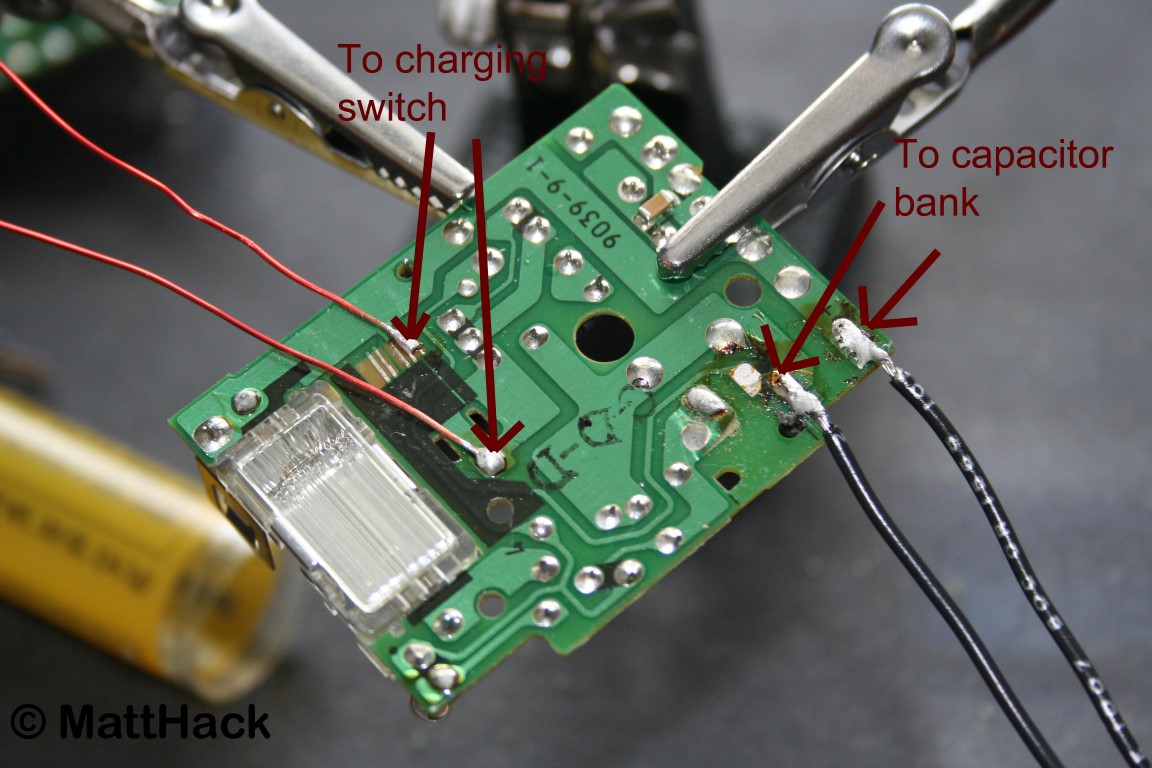 Once you have constructed the capacitor bank you have to connect it to the capacitor connector on the charging circuit. Personally I used some medium gauge wire that I had lying around, but you can use anything really (as long as it can handle the current). You also have to make sure that the capacitor bank is connected with the right polarity. (+ to+ and- to -). Then you have to wire up the charging switch. You can use any type of wire for this as the switch is super low current, but I chose to use some scrap magnet wire because it was thin enough to solder to the switch pads. The other end of this wire is connected to the switch on the enclosure and is used to start or stop the charging cycle. 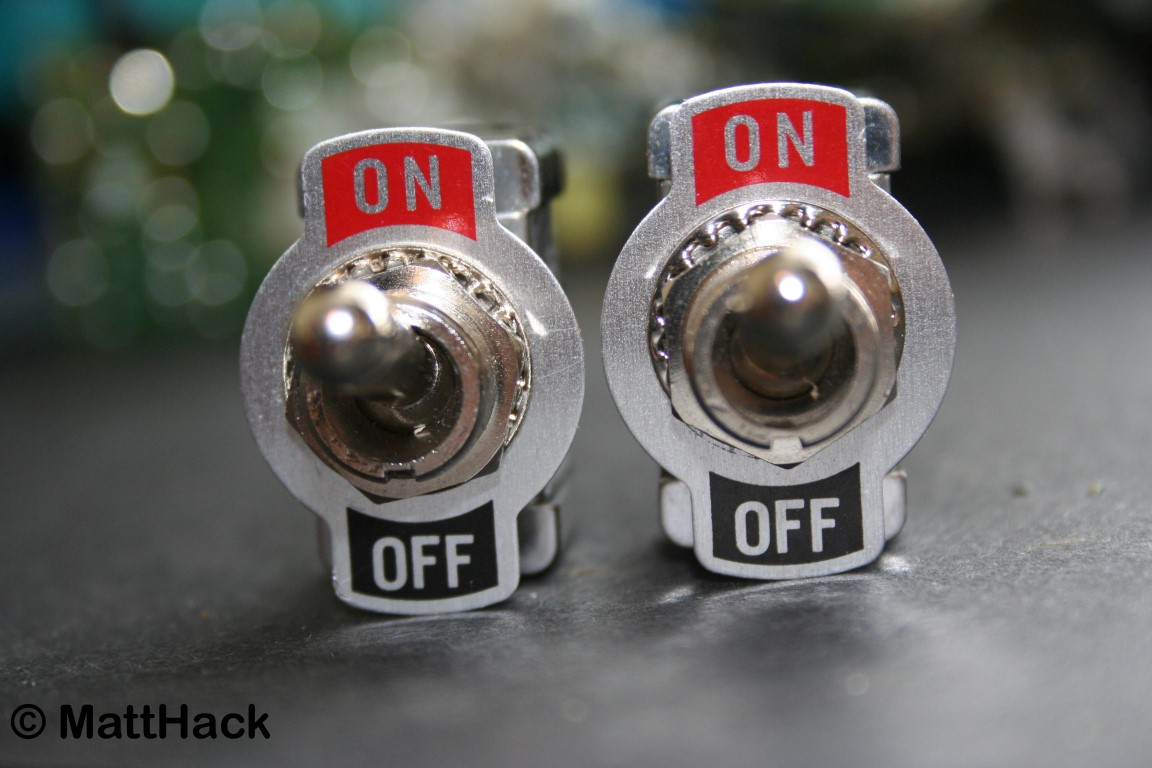 The charging and firing switches, capable of withstanding up to 10 Amps. (Smaller switches become welded shut when the coil gun is fired) 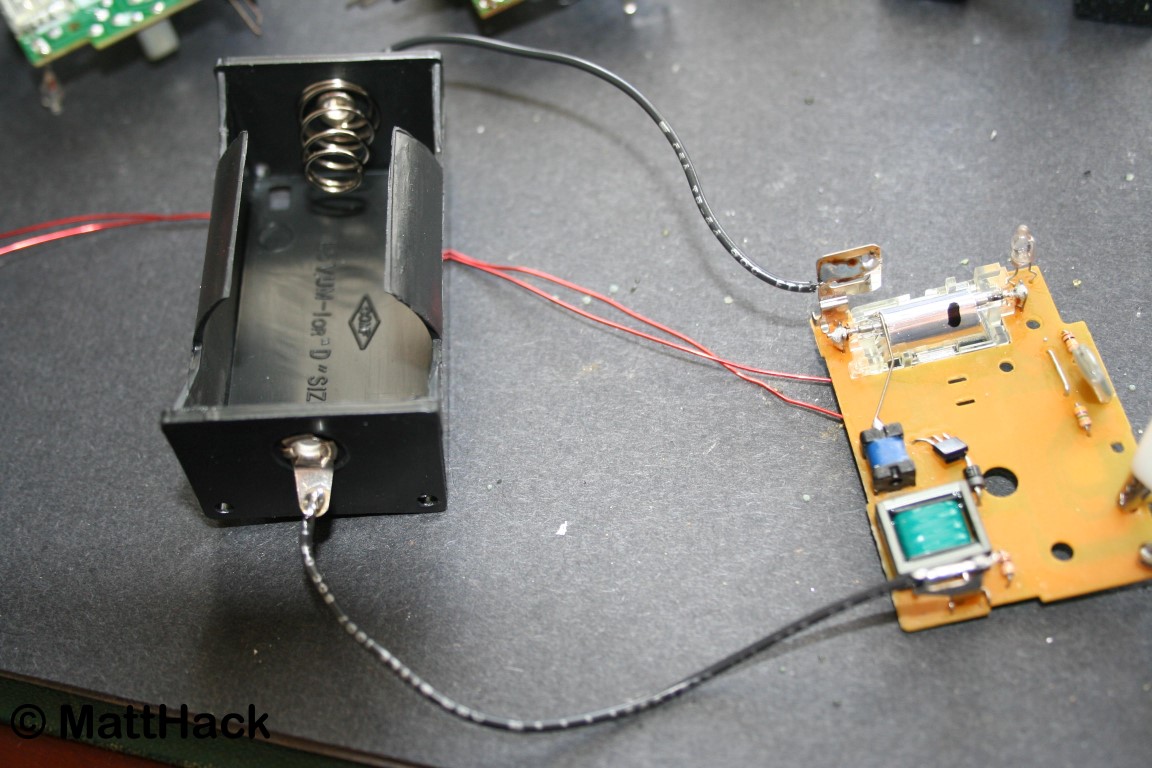 My power supply of choice is a D cell battery. The D size will give many more shots than a AA before having to be replaced. Also, using a battery will also allow the coil gun to be portable. To wire the battery all you have to do is solder the + and – from the holder to the + and – on the charging circuit. 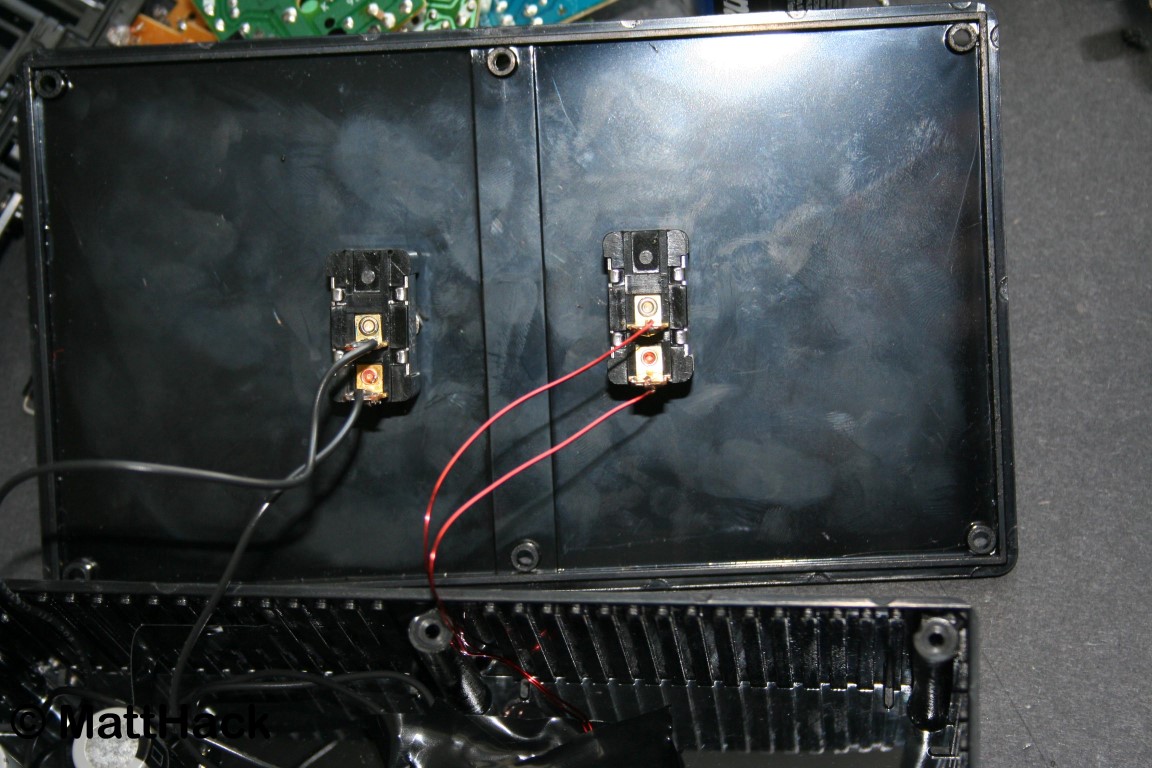 Now the only part left to wire is the actual coil. In my coil gun I wired a switch in series with the capacitor bank and the coil. When the switch is turned on the capacitors are directly discharged into the coil. 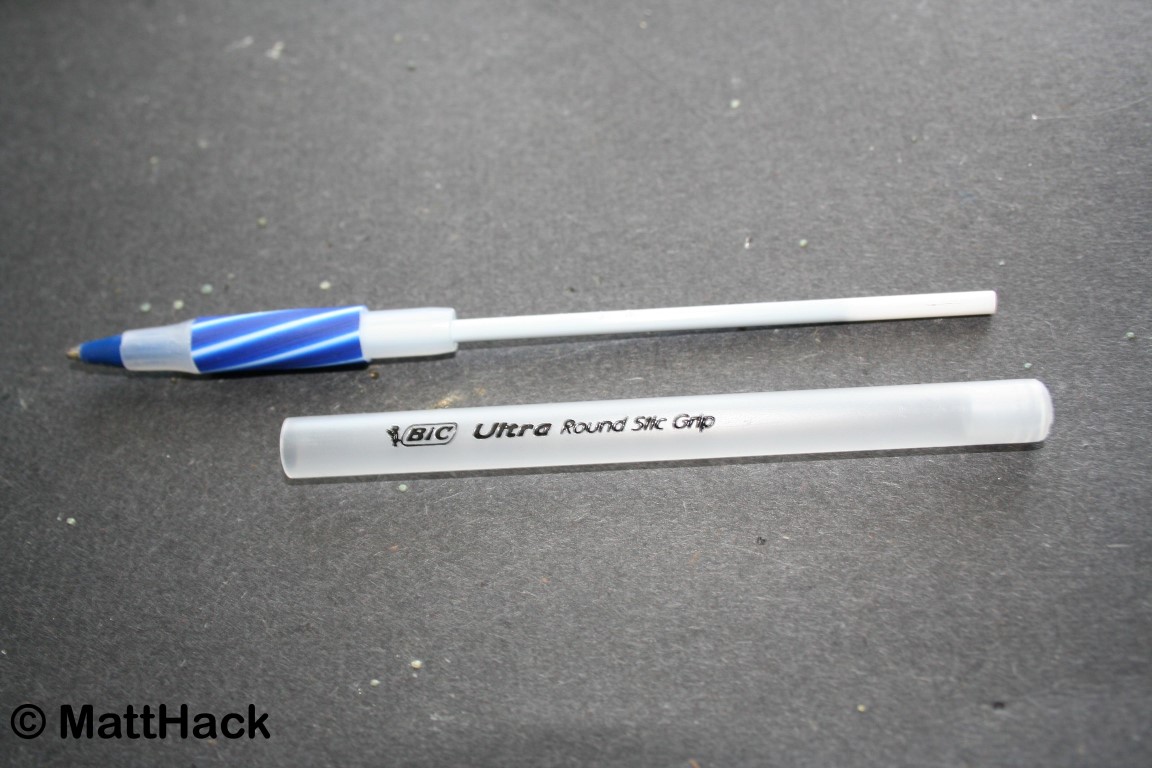 The “gun” part of the coil gun was made using a BIC pen. The pen was disassembled and everything but the tube was thrown out. The pen tube will act as the barrel of the gun. 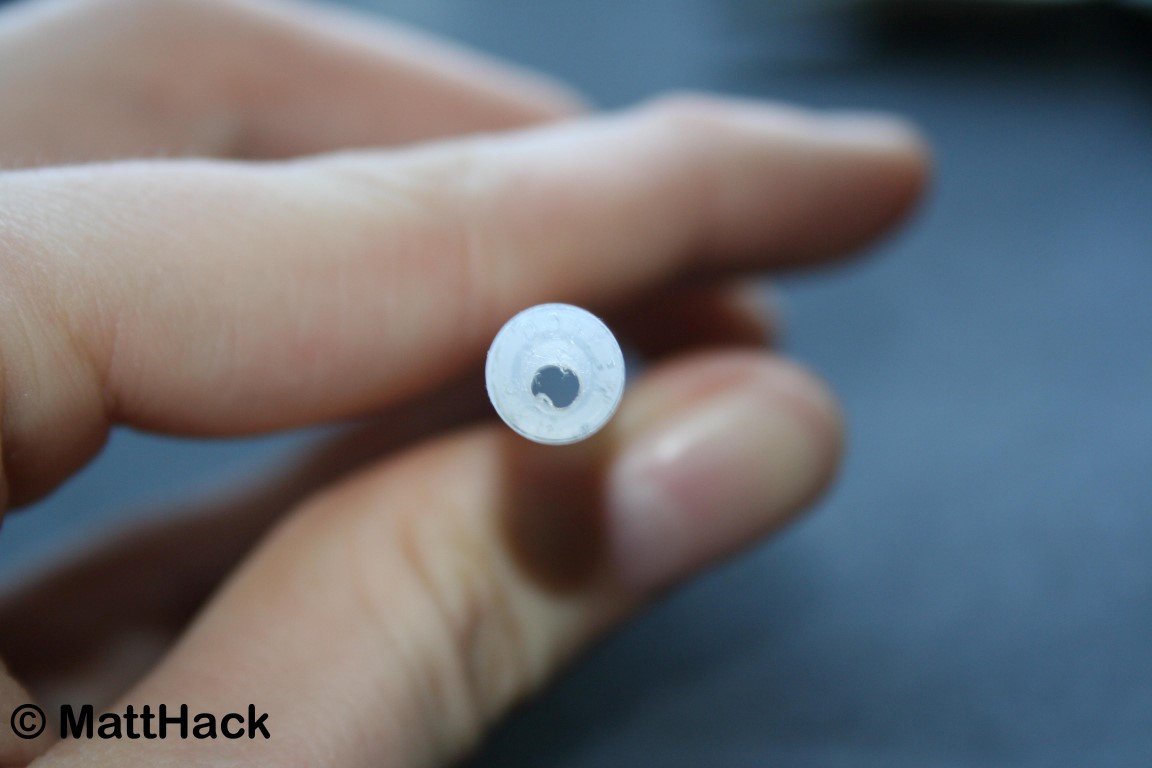 I drilled a small hole at the end of the pen tube to help reduce the suction effect that is produced when the projectile is leaving the barrel. 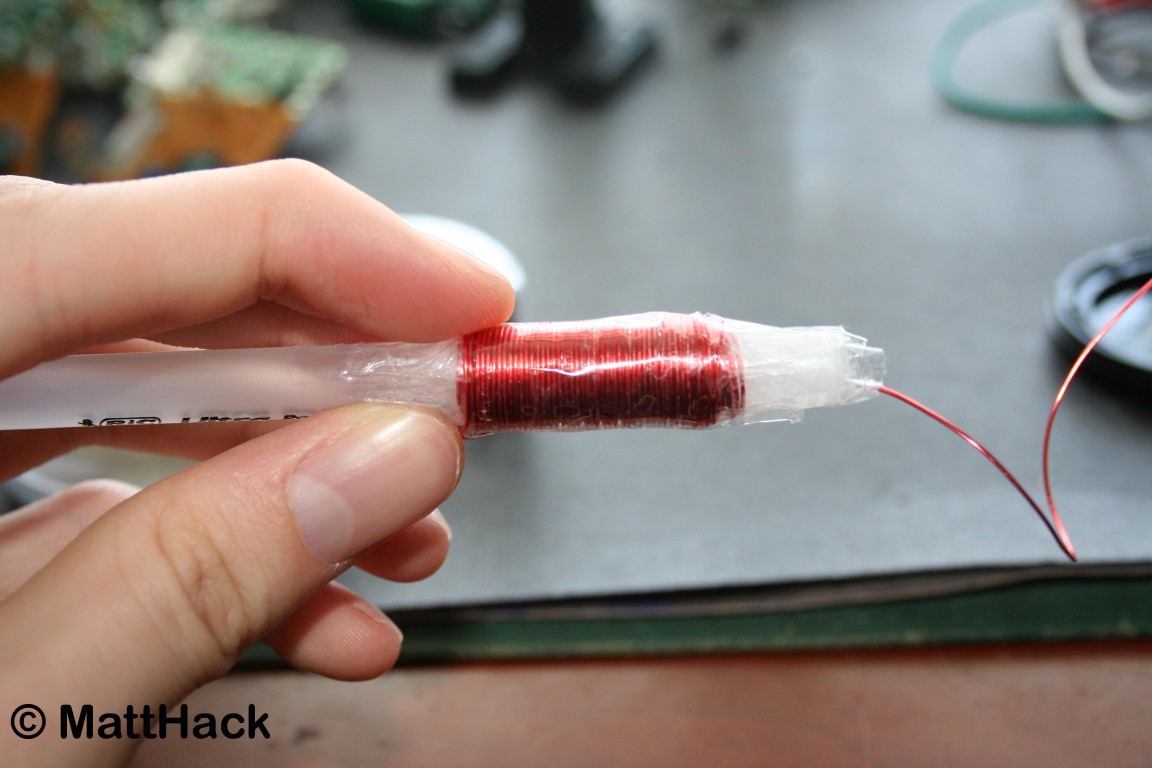 To build the actual coil I used magnet wire and wrapped it around the bottom of the tube about 1.5 cm from the end. The coil was about 3 cm wide and after every layer I “laminated” it with scotch tape. This helps the coil keep its shape as well as preventing shorts. When you make your coil you always have to remember to wrap the wire the same direction in every layer. (clockwise or counter clockwise) Also you should make sure that the turns are tight and close together but not crossing each other. If you follow these rules you will end up with a very powerful coil. My coil had 8 layers. 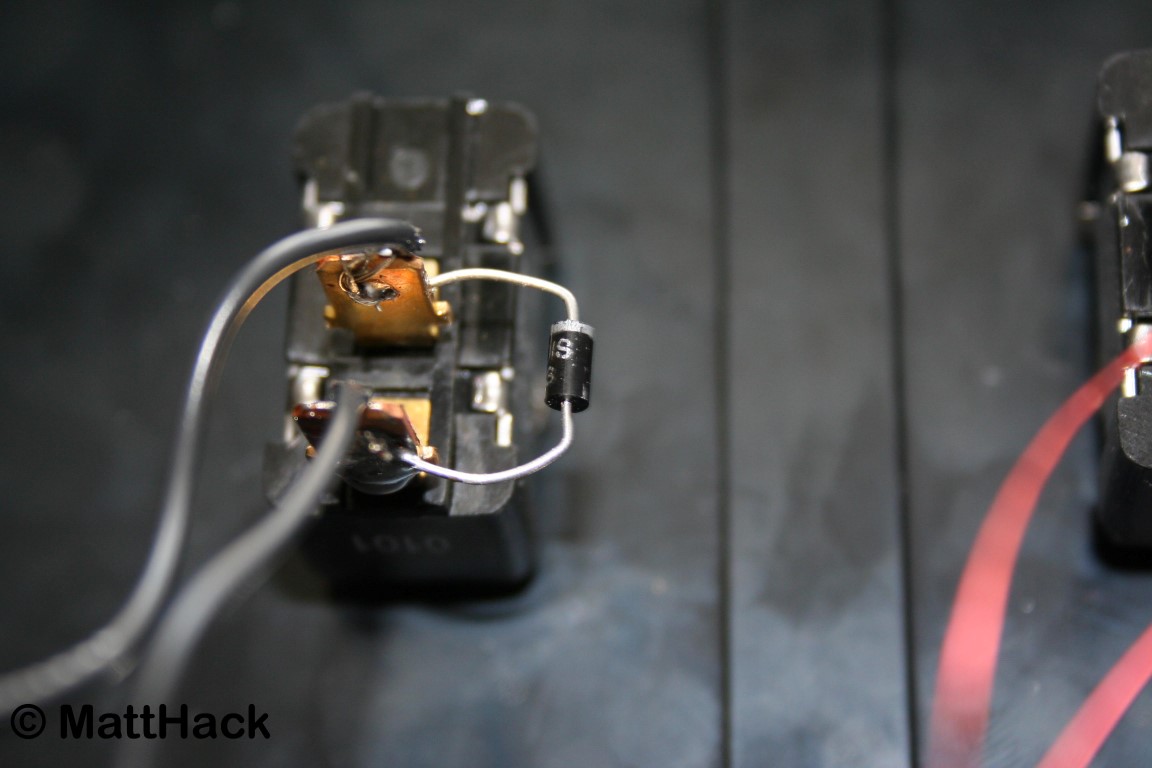 At the last minute I decided to add a diode across the firing switch. The diode protects the capacitors from feedback created in the coil after firing. 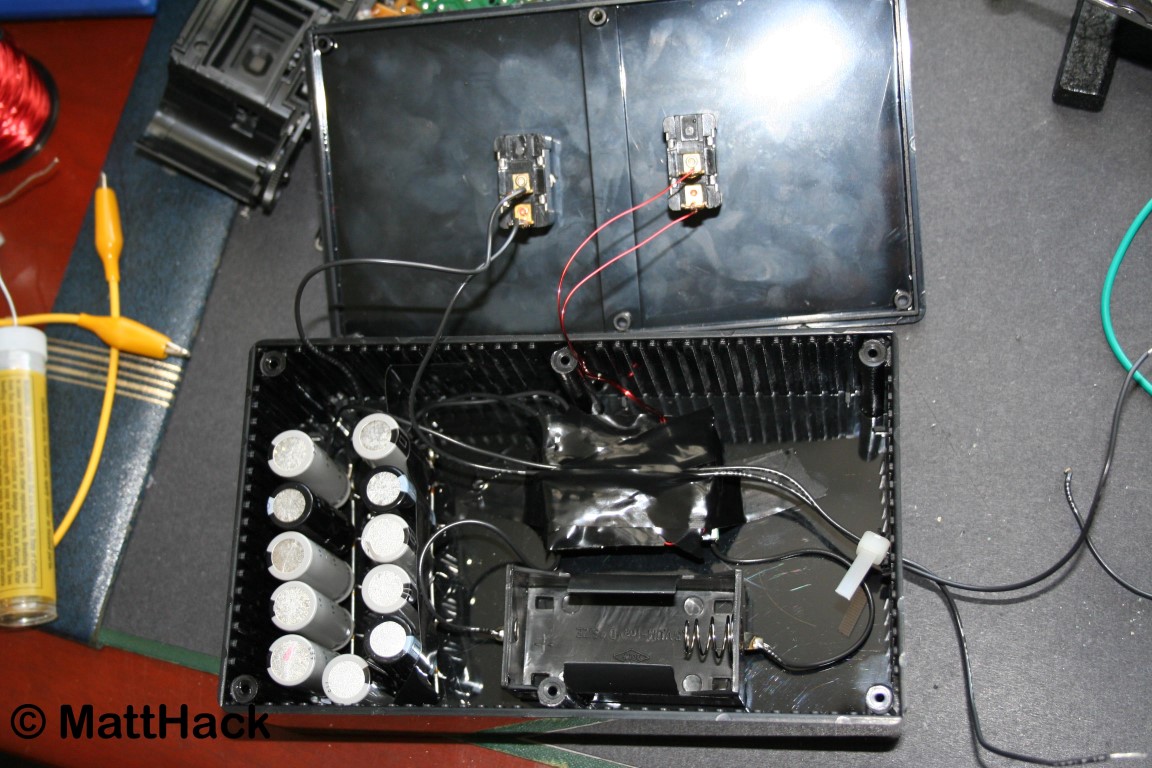 Once everything was wired up and taped in the enclosure I covered most exposed parts with electrical tape to reduce the chances of a short. (Or the dreadful blown off finger) 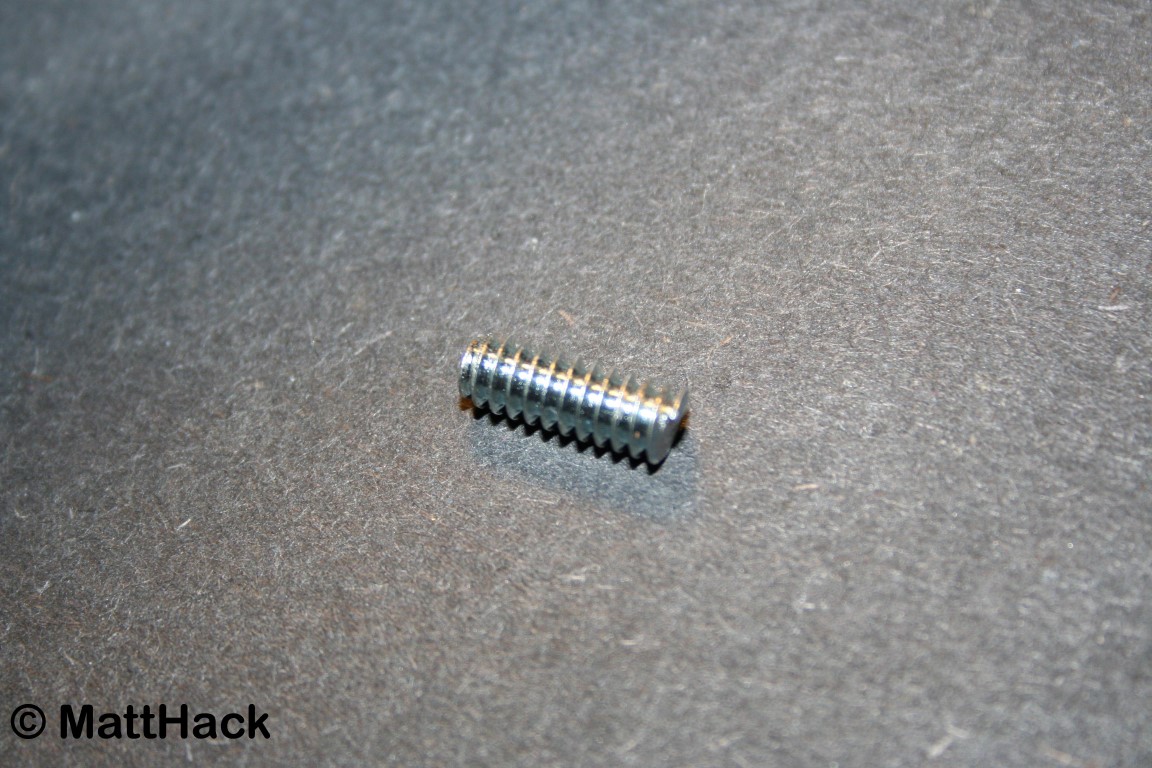 The projectile. (A machine screw cut with a hacksaw) 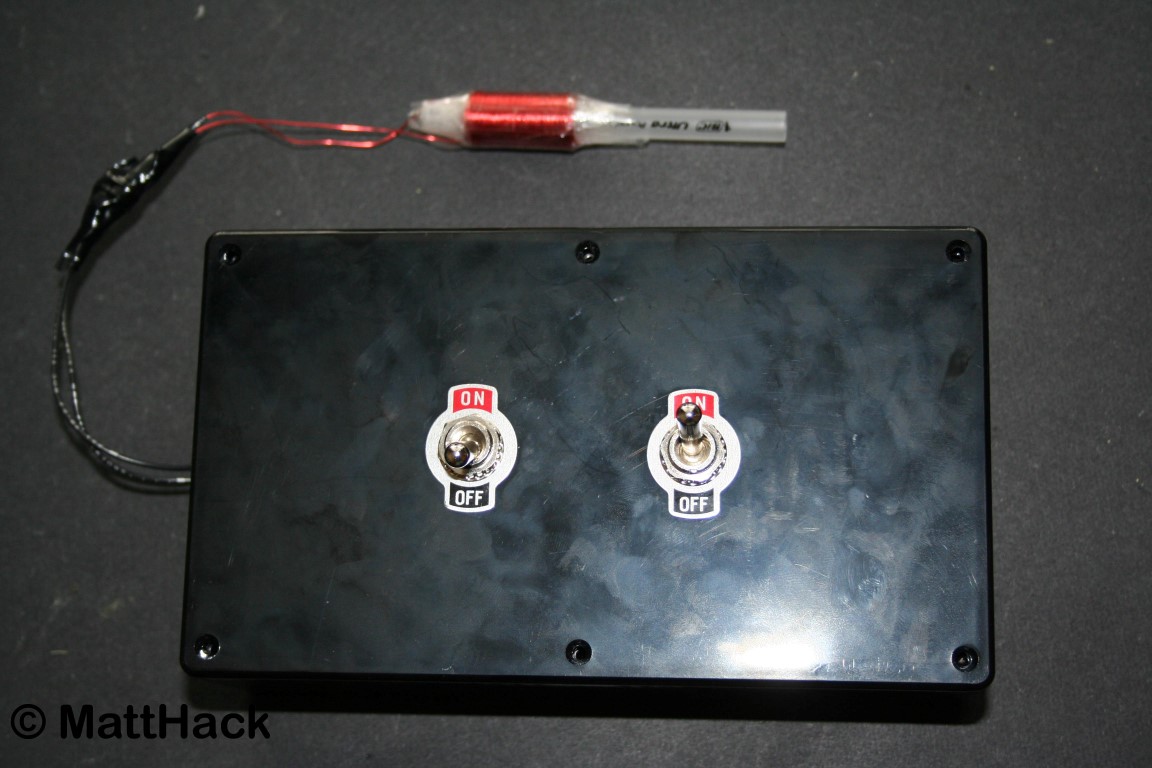 Now I just have to test it and tweak it

Here is a video of the initial tests of the coil gun v2.0. I have done absolutely no tweaking of the coil distance etc. and I’m hoping to get at least 75% more power out of it by doing so. I will post the tweaked version as soon as it is completed.
[youtube clip=”flgaVfTuvsM”]